Born in Mexico in 1840, where his father Peter “followed contract work in the silver mines”, Boniface was the second child born  to Peter and Maria Wisser.  The family returned to their home town of Herdorf, Prussia sometime between the birth of Boniface and the birth of his younger sister, Elizabeth (who was born in Herdorf in 1846), due to military and political unrest in Mexico.  Upon their immigration to America, the family eventually settled in Guth’s Station, Pennsylvania, where Peter continued his mining career.  Bonifacius (Bonifacio,  Boniface, Fassio, Fasse) was 12 when in 1852,  Peter was killed in a mining accident.  We don’t know exactly how long the family stayed in Guth’s Station after the accident,  but we do know they eventually resettled in Allentown.  The earliest evidence of Bonifacius in Allentown is a record of his confirmation in the Catholic church in 1858, 6 years after the death of his father. 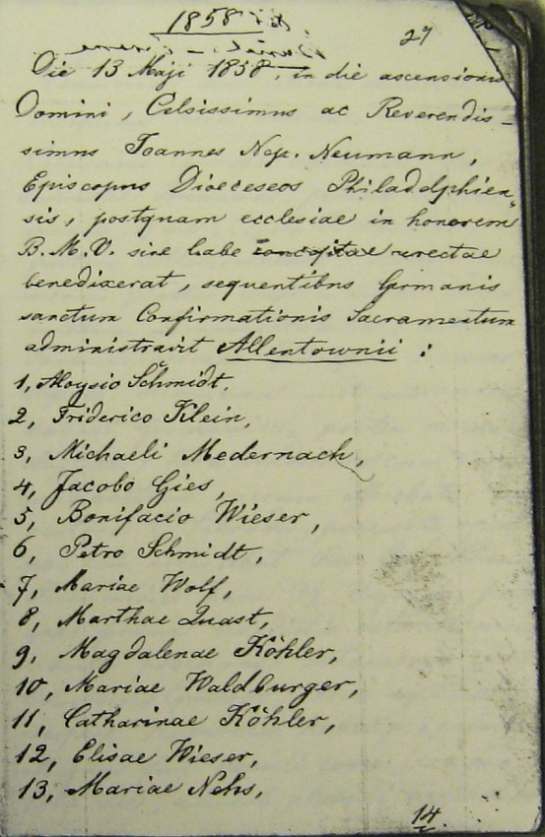 Bonifacius is the 5th person listed in one of the five name variations we have found in records.  His sister Elizabeth (Elisae) is also on this list (#12).  An interesting side note is that the bishop who conducted the Confirmation was Monsignor John Neumann, later to be canonized a saint in the Catholic church.

Boniface and Jane had six sons and an infant daughter (Anna Maria Magdalena, who did not survive).  We were able to find the Baptismal record for the baby girl, but there is no record of her after that.

Gopsill’s Allentown Directory 1864-1865 lists Fassio Wisser, occupation, blacksmith living in a house on Front St.   Maria Wisser (Maria Margaretha), widow of Peter is listed at the same address.   The 1869-1870  directory lists Fasse Wisser, occupation, engineer at a house on the corner of Law and Gordon (526 Gordon).  History of Lehigh County (published, 1914), states Bonifacius ” was a stationary engineer at the Allentown Rolling Mills, where he was employed for more than a quarter of a century.”  By 1877, Bonifacius  has moved to a larger house at 406 Ridge Ave, a block from his mother.     He would live here until his death in 1903,   After his death, the family continued to reside at 406 Ridge until 1909, occupying the house for over 30 years.

B WISSER In this city, January I8, 1905, Bonafacies (sic) Wisser, aged 61 years, 7 months and 3 days. Funeral on Wednesday morning at 8.30 from his late home. No. 406 Ridge Avenue. Relatives and friends are respectfully invited to attend. High mass will be sung in the Church of the Sacred Heart of Jesus at 9 o’clock. Interment In German Catholic Cemetery.

The funeral of Bonafacies (sic) Wisser took place Wednesday morning from his late home at 406 Ridge Avenue with high mass in the Church of the Sacred Heart by Father Nerz and Interment in the German Catholic Cemetery. Many friends of the deceased attended. 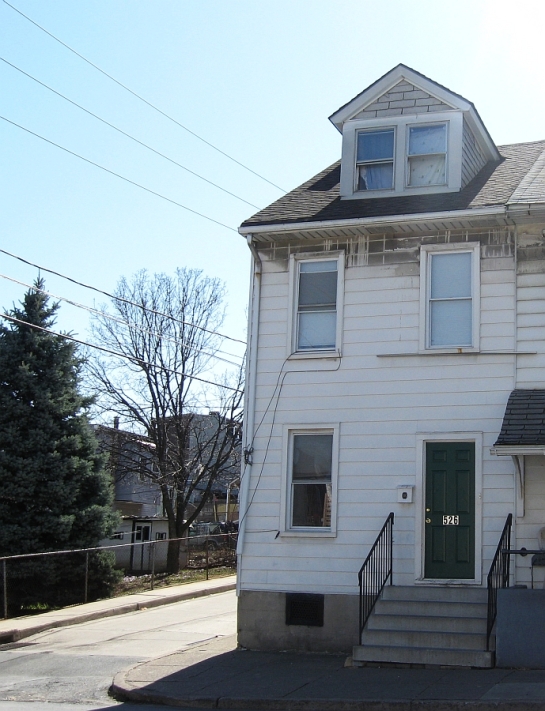 Above: 406 Ridge Ave today. Like his mother, Maria Margaretha, Boniface lived in the section of Allentown known as the 1st ward (zoom feature at bottom of screen). 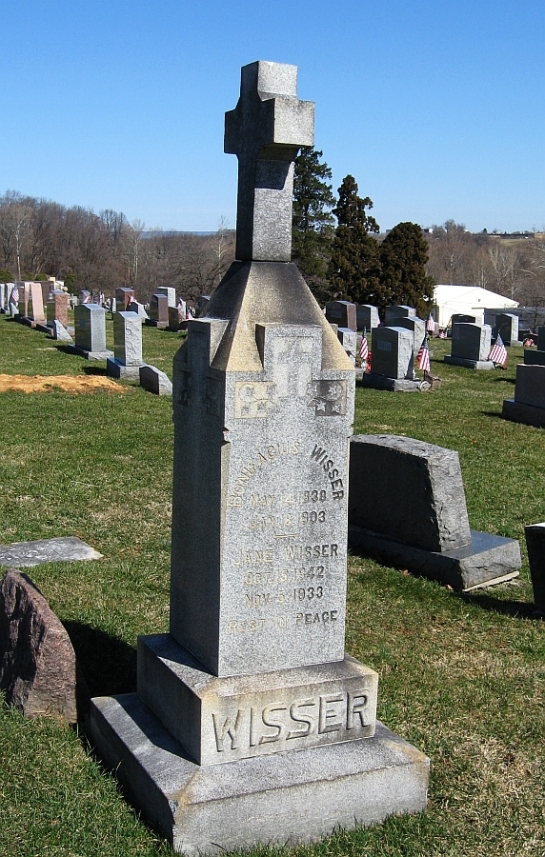 Above: The grave of Bonifacius and Jane Wisser.  Their son Charles A. (5/30/1869-2/12/1902) is listed on the other side of the stone.   There is a separate stone for their son Joseph F. (1875-1955)  next to the big stone.  We believe the birth date on the stone for Bonifacius to be off by two years.  His sister Pauline was born September 22,1838.  There is documented proof of this date from the church records in Herdorf.  As other records confirm that Pauline was two years older than Bonifacius, they could not have both been born in 1838.  Therefore, Bonifacius must have been born in 1840.

The Wissers sailed from Antwerp,Belgium to New York on the Stadt Antwerpen (City of Antwerp), a wooden sailing vessel. Read about this type of vessel here.

Crossing the Atlantic in the 19th Century

Peter Wisser and his family crossed the Atlantic three times in the first half of the 17th Century. Immigrants crossing the sea at that time, often faced danger and hardship. Click ---here--- to learn more of what these ocean crossing journeys were like.

Peter Wisser and family arrived in New York in Jan 1848, before official immigration processing centers were established. The shipping company would present a passenger list to the Collector of Customs, and the immigrants would then make whatever Customs declaration was necessary. The following is extracted from: Frederick Binder and David Reimers, All the Nations Under Heaven: An Ethnic and Racial History of New York City (New York: Columbia University Press, 1995). "Before Castle Garden was designated as the central landing place for all immigrants disembarking at the port of New York in 1855, new arrivals came ashore at several different piers along the East River. While immigrants reported to be carrying communicable diseases were quarantined at the Marine Hospital on Staten Island, there was little formal processing that occurred. Once newcomers disembarked, they were met by often unscrupulous runners—agents of boarding houses and companies that transported immigrants to the interior of the country. Frequently of the same ethnicity and speaking the same language, these runners repeatedly took advantage of new immigrants, overcharging them for rents at boarding houses and rail and steam ship tickets . In 1847, the New York State legislature established the Board of Commissioners of Emigration. According to historians Frederick Binder and David Reimers, “They were given both the power and the funds to inspect incoming ships and provide aid, information, and employment assistance to the immigrants.” --------------------

Wissers in the Industrial Revolution

The Wissers were firmly entrenched in the emerging industries for the first couple of generations after they reached America. Click on these links to learn more about the jobs some of the Wissers were doing.

Puddler
Coremaker
Cigar maker (Click on Page 21 on that link)

Links to Other Wisser Genealogy Sites

The Wisser Family in America Searching for your Wisser roots but haven't found them here? Try This site created by our friend Gary Wisser. It's the most comprehensive information on Wisser families in The United States you're likely to find.